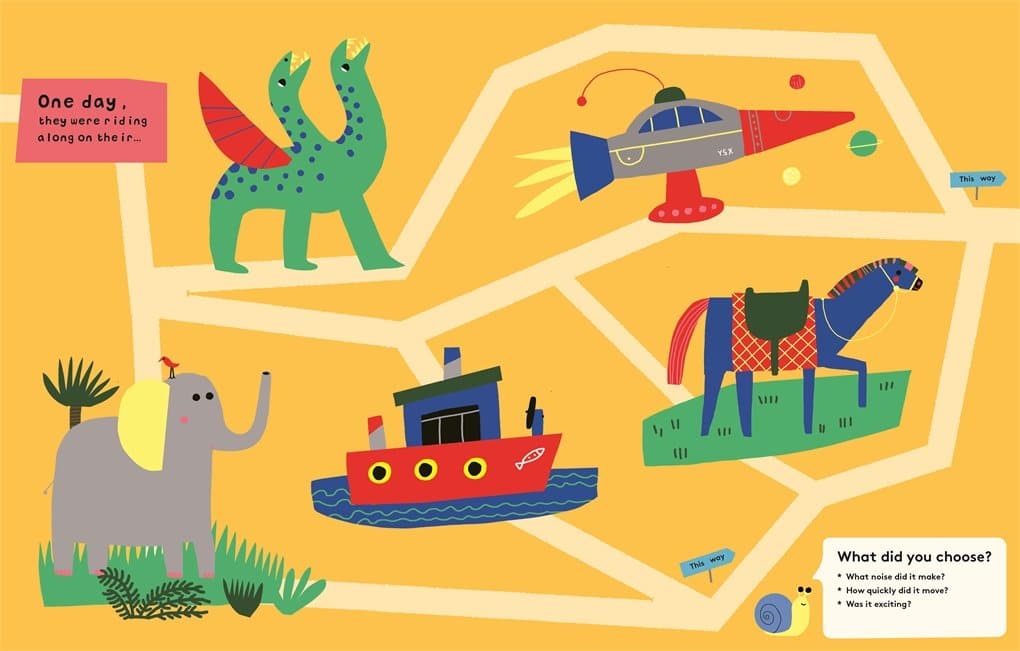 In English lessons this week, we have been taking inspiration from the fantastic ‘Story Path’ book. This special book allows the children to create their own stories by choosing who they meet, where they go and what they do. 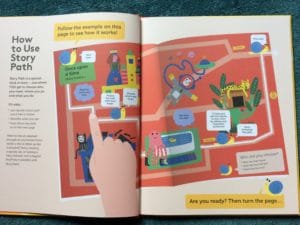 Each class have created their own story and the children wanted to share their class stories on the website.

Once upon a time there lived a cat called Mabel. She lived in a castle with a witch called Dotty. Mabel was very sad because she lost something very special to her.

One day they were riding along on their old, blue fishing boat which moved very slowly. As it glided through the water it made a gurgling noise.

As they turned the corner they were stopped by a mysterious ayeaye who had big black eyes and it said “Hi, I’m giving you a magical key”. They reached out to touch it.

In a puff of smoke they were magically taken to a strange new place. It was an island. The island was shaped like a coconut and smelt like coconuts too. Around the island were dolphins and seagulls.

They followed the path this way and that until they came across a big sandcastle with lots of shells scattered all over it. It looked very cosy. They thought pirates lived there.

They knocked on the door and it was opened by a family of friendly monkeys. They were all blue except for the Daddy Monkey who was black. They loved to talk about bananas and banana trees. The house looked like a banana and a banana tree. Then they invited them in for a tasty meal of strawberries.

Suddenly, there was a crash of thunder! Standing in the doorway was a mean and scary bird. He smelt of marshmallows and made squawking noises. He scooped them up and took them as a prisoner to the beach.

They were trapped! But then they spied an enchanted key which turned the monster into a shell and the monster said “A little help?” The magic lasted two hours.

As they made their escape they discovered a room full of clothes. They quickly disguised themselves as a superhero. The outfit fitted perfectly. Then they put on a red Viking hat.

They crept into the next room where they stumbled upon some pirate’s treasure that was very heavy. There were gold coins, skull bones, a message in a bottle, trophies and lots more. The golden trophy with the red jewels was the best treasure.

With their pockets full of treasure they ran outside where they found a sleigh which was about two metres long. It made the noise of an aeroplane.

They sped off as fast as lightning along the way they saw a volcano and it made the loudest, largest explosion. It was so dangerous that all the parrots flew away to the Butterfly Island. They also saw butterflies flying with the aeroplanes and snakes slithering on the moon.

Finally they made it home. They told their friends all about their adventure. And then they had a party. Before falling asleep in their pirate ship they fell asleep for five hours and they had a dream about pirates.

And they lived happily ever after. 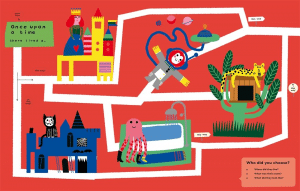 Once upon a time there lived a spooky cat called Steve. Steve had big whiskers, razor sharp teeth and deep, dark eyes. He lived in the spookiest house that was haunted by big bats, scary spiders and raucous rats.

One day they were riding along on their two-headed, flying dinosaur. The dinosaur screeched a dreadful noise as they slowly made their way along their journey.

As they turned the corner they were stopped by a mysterious fish. The fish had a brightly coloured yellow jacket on and a woolly, red hat. The fish was holding a wooden fishing rod that had a sharp hook attached to the end of the string.

‘Hey Steve!’ said the mysterious fish, ‘Where are you going?’ he asked quietly.

‘I’m off on a journey,’ Steve replied. ‘Would you like to come with me?’ he queried. The friendly fish looked surprised when Steve asked him this.

‘I would love to join you on your mysterious adventure!’

In a puff of smoke, they had been taken to a strange new place. It was a magical space theme park and it had lots of red-eyed aliens who were going crazy. There was a smell of BBQ coming from the helta skelta and the noisy wolf cried a loud roar!

They followed the path this way and that until they came across an alien’s house. Steve went in, he felt very curious. It was medium in size but it felt bigger on the inside. It was extremely cosy even though it was made out of cling film. Steve thought that an alien and a hippo dog might live there. The alien was very kind and waved at Steve from the window.

They knocked on the door and it was opened by a family of friendly monkeys. They were blue and quite silly and their house was very warm and cosy. They sat at the kitchen table talking about bananas because they didn’t have any. Steve gave them some bananas because he had bought some from the shop earlier.

Suddenly, there was a crash of thunder! Standing in the doorway was a mean and scary blue monster. There was a funny smell coming from his lunchbox. He saw a grey rat poking his head out of the box. When the monster saw the rat, he growled horrendously and took Steve and the mysterious fish to the spooky forest.

They were trapped! But then they spied an enchanted pink wand which turned the monster into a rainbow umbrella. The monster apologised to Steve and the mysterious fish for trapping them and he eventually set them free. Luckily, the enchanted wand’s magic would only last for ten minutes before he would turn back into a mean and scary monster again.

As they made their escape, they discovered a room full of clothes. They quickly disguised themselves as cowboys. Their clothes were now red, yellow and brown but they fitted perfectly. Thankfully, nobody noticed them in their new cowboy outfits. Then they put on a shiny, gold crown to complete their new look.

They crept into the next room where they stumbled upon a box full of cupcakes and candy. It was lighter than it looked and inside the cupcakes were strawberry and blueberry flavoured. There were chocolates with sprinkles and caramel which was Steve and the fish’s favourite!

With their pockets full of treasure, they ran outside, where they found a gigantic, wooden boat. As they sailed across the ocean, the boat made a squeaking noise and they got very wet. Steve was soaked through so he went to get a towel.

They sped off as fast as lightning. Along the way they saw a vicious volcano, a slimy snake and an imaginary aeroplane. They also saw some beautiful butterflies and a mesmerising moon that shone brightly across space.

Finally, they made it home. They told their friends all about their adventure and then they had a party with them before falling asleep in their coffin-shaped bed. As they lay in their soft, warm bed, Steve and the mysterious fish slept for eighteen hours dreaming about going on more adventures together and they lived happily ever after. 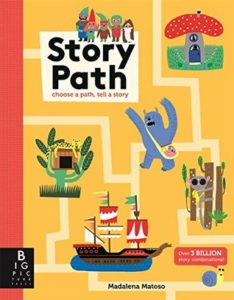